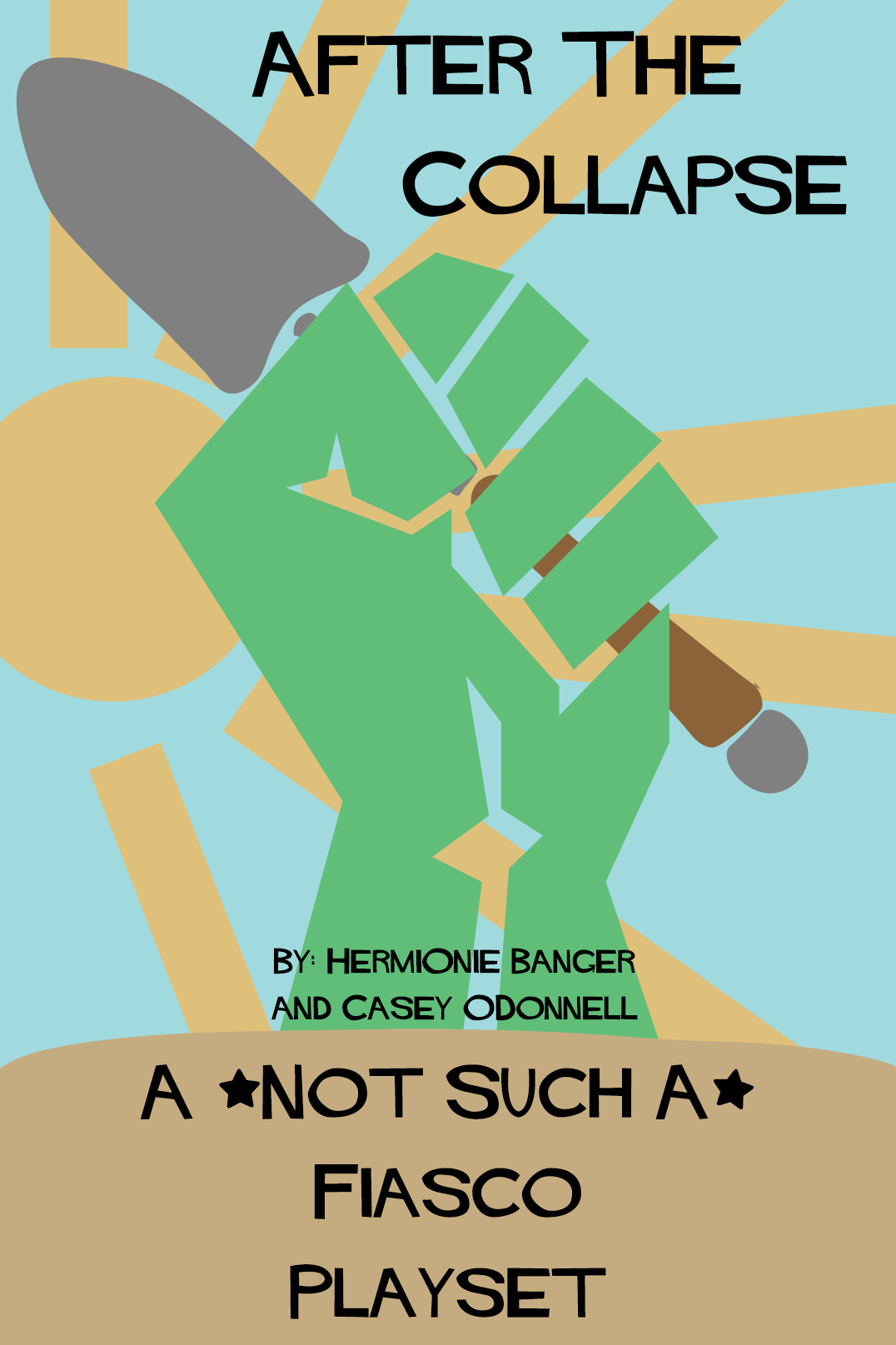 The original Fiasco  is a highly collaborative GM-less roleplaying game that nearly always ends in failure, death, dismemberment… Well, in a fiasco. That's kind of the point. But what if you want something a little more… Well, not such a shit show…

After the Collapse is a climate change science fiction (clifi) and solarpunk playset that uses a Fiasco mod (an altered Tilt and Aftermath) we created called (Not Such a) Fiasco. We've made a version for both Fiasco Classic and Fiasco 2nd Edition.

“Solarpunk is another relatively young movement that’s very positive and has a lot of focus on technological solutions at the local level. I associate that with youth maker culture, looking at kind of local solutions, local energy grids, ways of creating autonomous functioning systems of the larger structures of society break down. Climate fiction to me is about loving the world, and not being afraid to continue to love the world, even in a moment of mass extinction.”  -Stephanie LeMenager https://www.youtube.com/watch?v=P9XuxHtfOxQ

While (Not Such a) Fiasco is very much based on the original Fiasco, we have made a few modifications to the game to enable some of the opportunities we wanted to make available to players.

Check out their downloads for supplemental and preview materials.

To play, simply print the card pages on double-sided color printer paper and cut them out with scissors, sheers, or a paper cutter. Add the cut-and-sorted cards to the basic FIASCO 2.0 play material and enjoy!

WHAT IS (Not Such a) FIASCO? 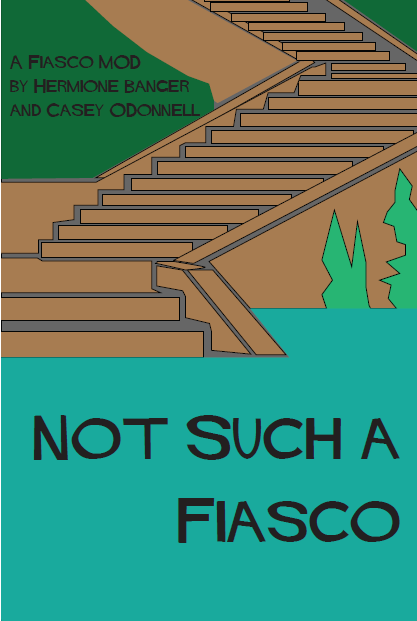 Fiasco, which this game is based on, is a GM-less storytelling game inspired by cinematic tales of small-time capers gone disastrously wrong. In (Not Such a) Fiasco, you’ll tell a story about ordinary people trying to find their way in a world that is a fiasco, that is rapidly (and not so rapidly) changing around them, and players are trying to make it not such a fiasco.

The goal of this game is to tell a fun story about humanity and change with your friends. Bad things will inevitably happen to the characters you control, and the game will work best if you work together to find the most interesting ways to navigate these waters and build a better world.

(Not Such a) Fiasco uses the softer Tilt Table that has been modified, as well as a modified Aftermath to enable borked endings less likely. 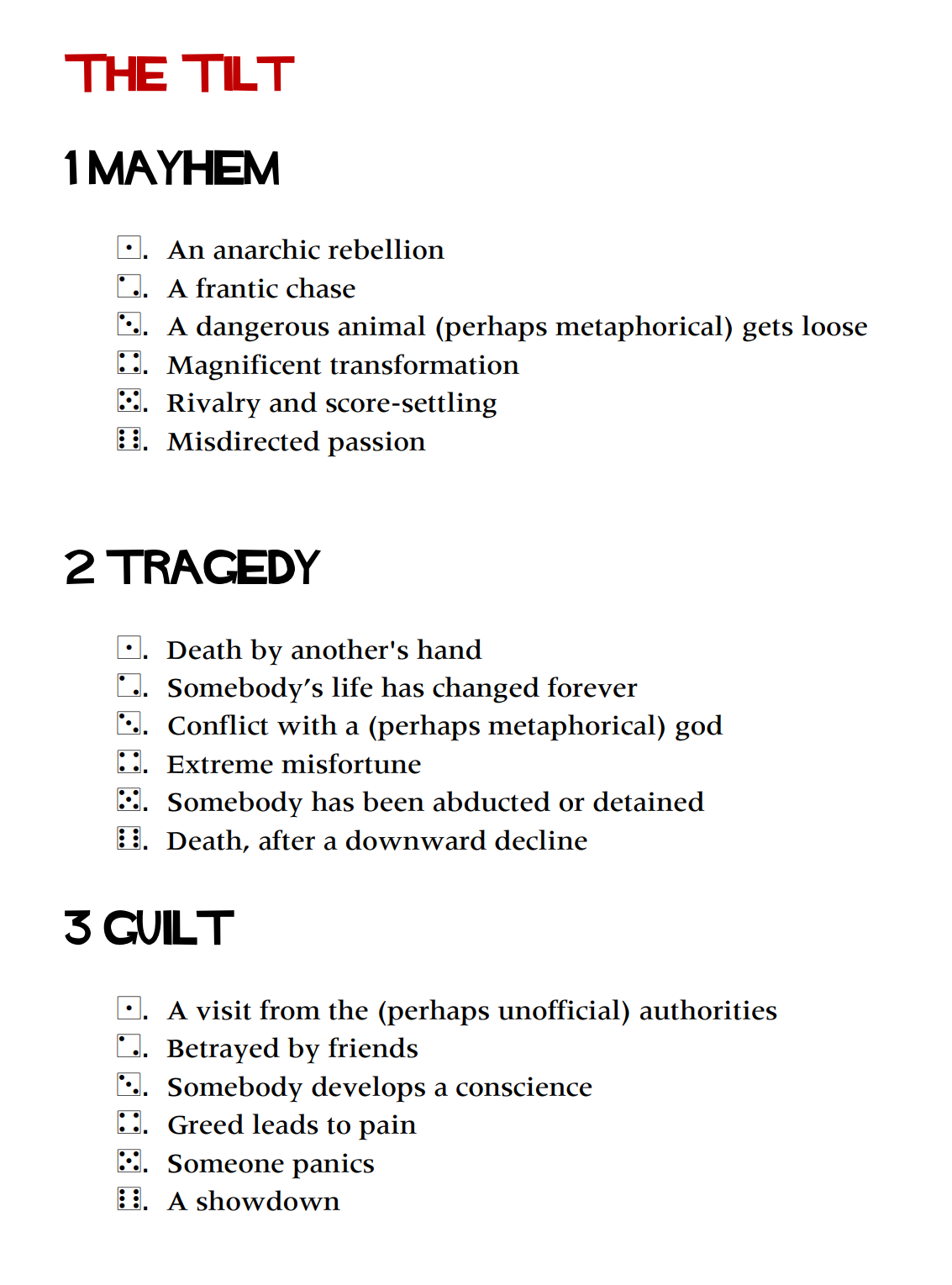 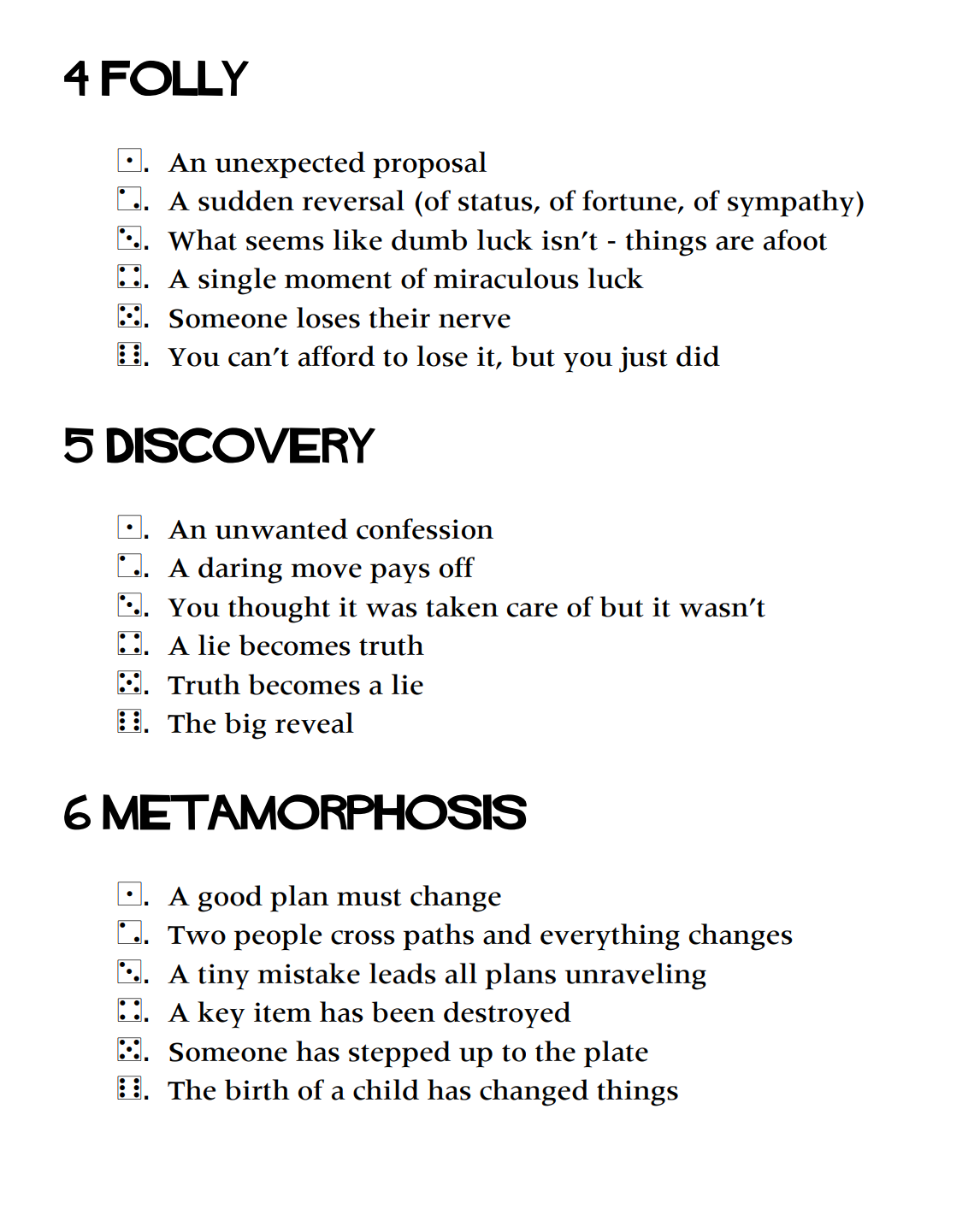 "Anyone can do a dystopia these days just by making a collage of newspaper headlines, but utopias are hard, and important, because we need to imagine what it might be like if we did things well enough to say to our kids, we did our best, this is about as good as it was when it was handed to us, take care of it and do better." - Kim Stanley Robinson in an interview with Terry Bisson

We are all now feeling the climate change in full force. The ice caps have largely disappeared, and the sea has swallowed up the majority of coastal metropolises. Deserts have expanded or transformed what was once the "bread baskets" of the world. Many governments have fallen as they became unable, or unwilling, to provide their citizens with the most basic of infrastructure, support, or care.

We turn to each other now, to small self-governing and self-sustaining settlements and decentralized networks. Powered by renewable energy, harvested from the sun and the wind, growing what we can and trading for the rest.

How will you and your community face it?

Get more in character with help from Miss Olivia Louise’s character concept post. 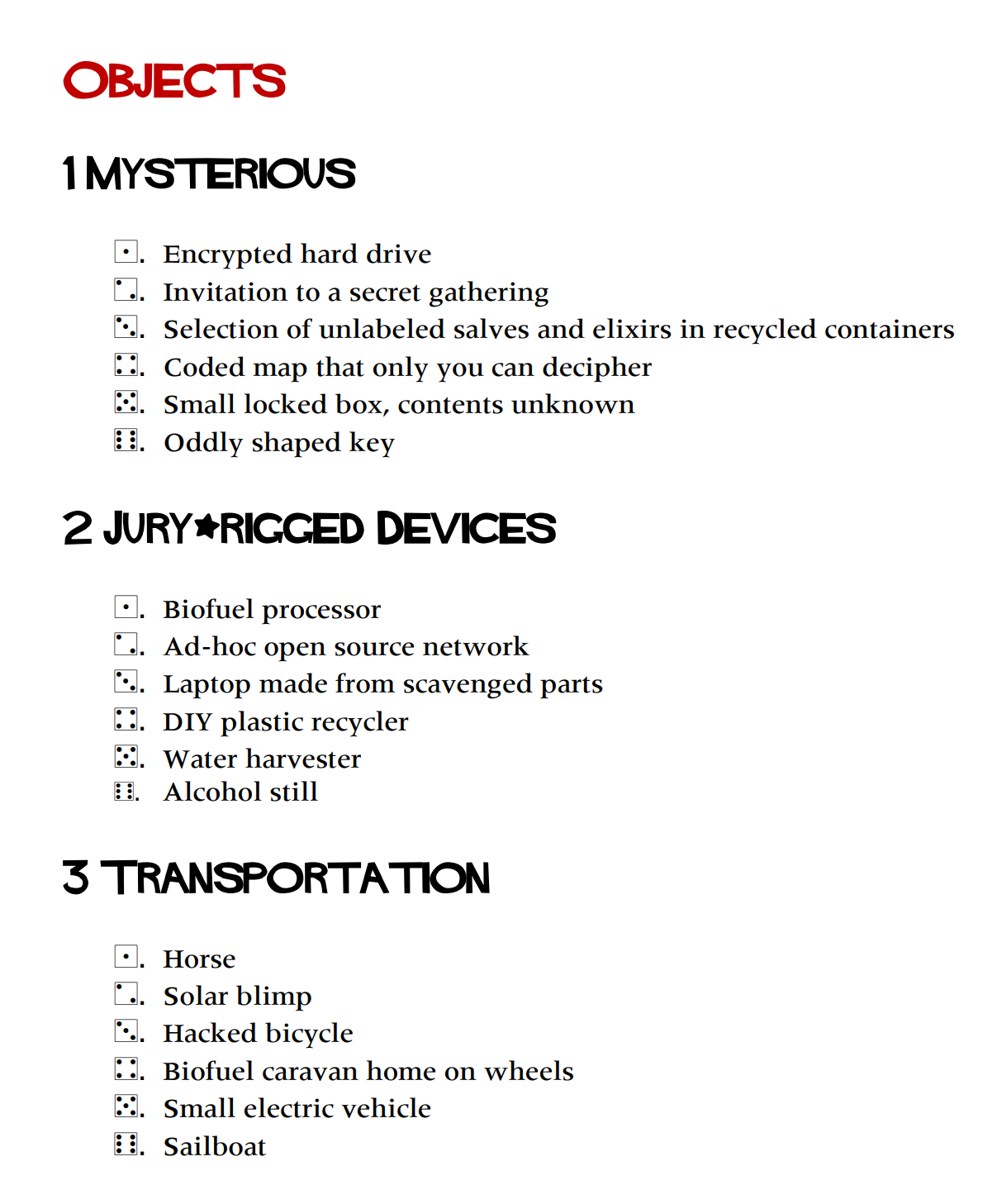 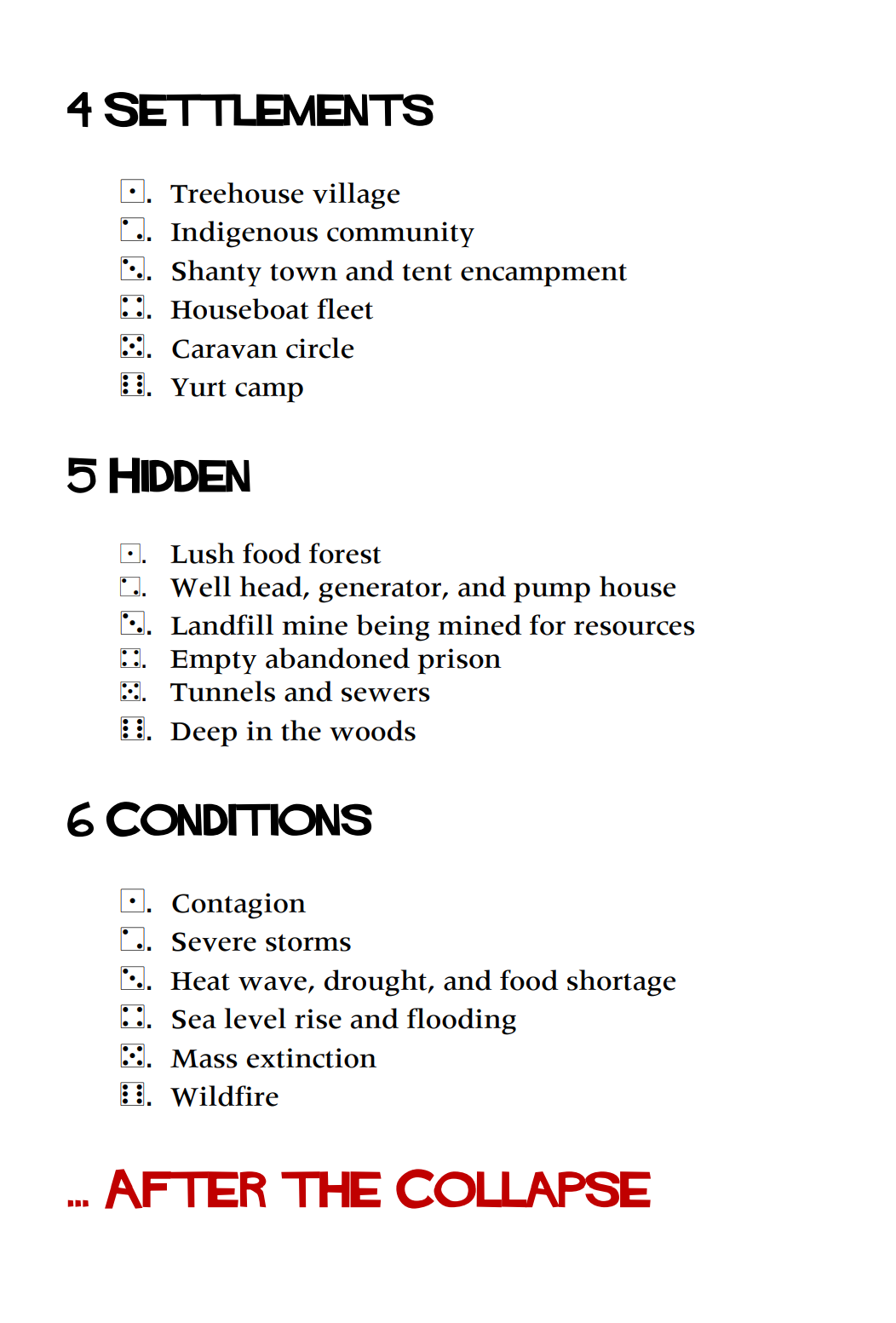 This is an unofficial, fan-made playset for Fiasco. Bully Pulpit Games is in no way affiliated with its content. For more information, see https://bullypulpitgames.com/games/fiasco/license/
FIASCO™, the FIASCO™ logo are trademarks of Bully Pulpit Games LLC. All rights reserved.

This work is licensed under a Creative Commons Attribution-NonCommercial-ShareAlike 4.0 International License.

Would love to see a version of this configured for the 2nd edition of Fiasco with cards, including the possibility for online play! (They have an official 2e module on Roll20 but I don't know how well it works - I bought it and immediately got overwhelmed by the UI)

That's a great idea! We'll have to get our hands on a copy. How do you like the 2nd edition compared to the first?

I’ve never played the first, so I don’t have a point of comparison! But the 2nd edition cards really helped by baby TTRPG table create a wild and zany story in 2 hours.

The Buly Pulbit website has a free template for designing your own card set: https://bullypulpitgames.com/games/fiasco/license/

This sounded like too much fun not to do, so we did it! We picked our favorite of the playset ingredients, and now there is a 2nd Edition playset available. Thank you for asking and providing the link for the Playset Creator! Hope you enjoy our playset!

I am hoping to get to play this game soon! Also, check the Applied Hope jam! It would fit in fine there.

Looks like a great jam, thank you for sharing it! Let us know what you think of our playset! 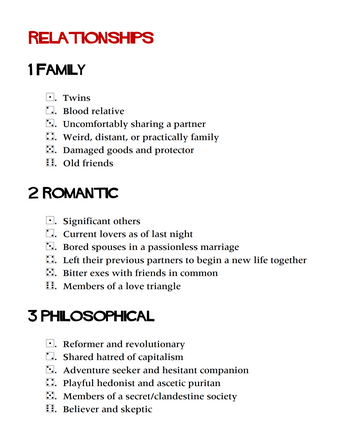 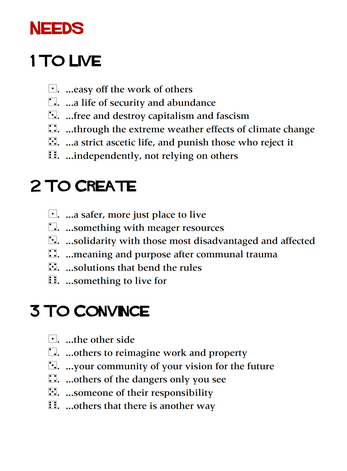 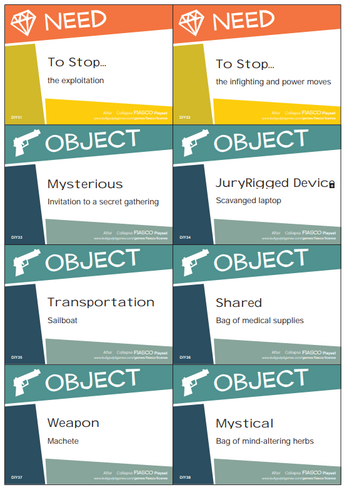 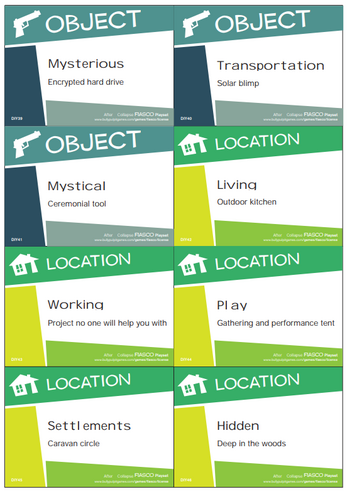